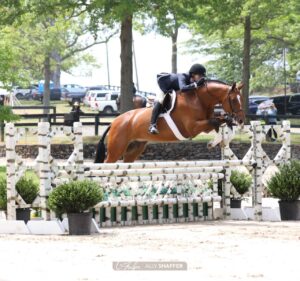 Holly Orlando and Waverly earned two firsts over fences before going on to win the under saddle class during the Green 3’’3” Hunters Section A, sweeping the division to take home the division’s championship title. The reserve championship honors in the division were presented to Winn Alden aboard Sincerely, owned by EMO Stables. Alden and Sincerely received a second place over fences and rode to a second place finish under saddle to earn the reserve tricolor.

Orlando was thrilled with Waverly’s performance, noting that the 8-year-old Hanoverian mare always wants to win and tries her best every time they enter the ring. They most recently competed at the Old Salem Spring Horse Shows where they also won the championship title during both weeks of competition. 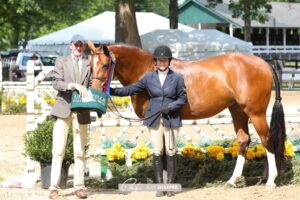 In the Green 3’3” Hunters Section B, Schaefer and Next Request, the 10-year-old KWPN mare, earned the championship honors after receiving a first place over fences as well as a second place finish on the flat.

Schaefer has been competing at the UCHS her entire life, but she believes each win is special. Next Request is still a relatively new mount for Schaefer and she is thrilled with the mare’s progress as she prepares to show with owner Liz Tarumianz in the Amateur Hunters later this week.

Competition in the hunter divisions at the UCHS will continue Wednesday, June 9, beginning at 8 am, featuring the professional hunters and concluding with the presentation of the Grand Hunter Championship as well as the Leading Rider.

Holly Orlando – Green 3’3” Section A Hunter Champion
On Waverly:
“Waverly, Poppy in the barn, is 8 years old and this is our third year with her. The guys in the barn call her the little machine because she is such a good show horse. She always rises to the occasion, she’s never going to let you down, she’s not spooky, she jumps high, I just can’t say enough good things about her. We’re so lucky to have her.”

On Waverly’s Performance:
“There’s a lot of atmosphere in the schooling area, so I think she was a little bit nervous, but as soon as she walked into the ring she knew it was show time and she went right to work.”

On Upperville:
“Everything. The rings are amazing to ride in, they do such a beautiful job. The management does such a good job. The jumps are beautiful, the courses are great, I can’t say enough good things about this horse show. We look forward to it every year.”

Samantha Schaefer – Green 3’3” Section B Hunter Champion
On Next Request:
“This horse belongs to Liz Tarumianz and this was actually my first show with her. I believe she was imported within the last year, maybe the last six months, so she doesn’t have a whole lot of hunter experience. I showed her yesterday in the 3’3” Performance Hunters and she was awesome, she was second. Today was my second day with her. I made a goofy error in the first class, but she was super in the second class and the under saddle. She is Liz’s horse and Liz is going to do her in the Amateurs this week.”

“I’ve been coming here as long as I can remember – I did leadline, walk/trot, and I don’t think I’ve ever missed a year. This is one of those horse shows that means a lot to me. It doesn’t matter what division you are doing , just to win at Upperville is always a big deal and pretty prestigious, so I think it was nice to bring a young horse out and have success.”