Even Coluccio rode Pritchard Hill to the Grand Hunter Championship at the 2021 Upperville Colt & Horse Show. Photo by Teresa Ramsay.

Upperville, Va. – June 9, 2021 – Wednesday concluded competition in the professional hunter divisions at the 2021 Upperville Colt & Horse Show (UCHS), where Evan Coluccio and Balmoral’s Pritchard Hill captured the Grand Hunter Championship, which is awarded to the horse acquiring the greatest number of points in one or more rated divisions. Scott Stewart once again claimed the Leading Hunter Rider award after earning tricolor honors in several divisions.

Coluccio and Pritchard Hill, a 9-year-old Warmblood gelding, acquired points in the High Performance Conformation division, sponsored by Mr. and Mrs. Ernest M. Oare.  Over Tuesday’s and Wednesday’s competition the pair captured two firsts and two seconds in the over fences classes and handy round, while also winning the under saddle class. The pair received the Sallie J. Sexton Challenge Trophy donated by Sexton’s family.

Coluccio described how easy Pritchard Hill was in the barn and just how fun he is to have. He explained that he loves to go on trail rides and being ridden by the juniors. Later this week, Alexa Lignelli will show Pritchard Hill in the Junior Hunters. 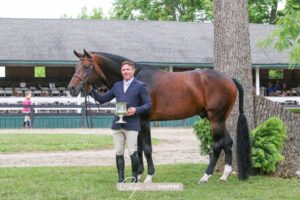 championship aboard Dr. Betsee Parker’s Hudson to clinch the Leading Hunter Rider award. Stewart was also champion or reserve in almost every other professional hunter division. He was awarded the Charlie Weaver Memorial Perpetual Trophy donated by Pamela Vance, Brian Simonson and his friends and family in his honor for obtaining the highest number of rider points during the professional hunter divisions.

“Well, he’s amazing. He’s very well known, last year he was Horse of the Year. He’s from California – Carlton Brooks produced him and brought him along and he’s really special, this is Carlton’s child. I was very fortunate that we were able to get him and have him for myself and Alexa Lignelli, who also rides him in the junior hunters.”

“He was amazing. He was spot on. He always tries to be good and his jump is sort of one of a kind. He is the sweetest, he is so easy.”

On the Upperville Colt & Horse Show:

“It’s awesome – It’s crazy that it’s such a big show this year. I have been coming here my whole life, so for me really watching the show grow is impressive, but it’s amazing showing here.”

On the horses this week:

“We had a great couple days showing. All my horses went great, I was champion and reserve in most of those divisions. It’s always nice to ride out there, the courses today were especially well made and beautiful – the horses really jumped. My first horse this morning got a 90 and a 94 which was great at 8 o’clock in the morning. It’s always great to come here and the leading rider is in Charlie Weaver’s memory which is great. I grew up watching him ride so I always look up to him and that is really special to win that.”

On winning at Upperville:

“Well, I have Betsee who is such a great supporter of the hunters and myself and always bringing horses along and having horses for the divisions, so I think it’s great having an owner like her. There aren’t too many owners who support the hunter riders like myself, so I am very fortunate. Everyone brings their best horse and tries to have their best rounds because you have a great round in that ring and it will really feel like you had a great round. It’s an exciting historical horse show.”

On training to come to Upperville:

“We tried to set the courses at home a little more open because we don’t have the hill in our ring, a little bit more opening lines and a little bit more galloping. This is one of the few places where you get to gallop a little bit more than Florida, even though the lines are set normal you don’t ever feel like you can gallop. So just getting them comfortable with much more pace.”