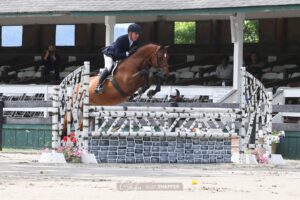 Scott Stewart and For Always

Upperville, Va. – June 7, 2021 – The 2021 Upperville Colt & Horse Show (UCHS) welcomed its 168th edition of elite hunter and jumper competition Monday, where the Performance Hunter divisions were highlighted in the Main Hunter Ring. At the conclusion of the first day, it was Jimmy Torano and Scott Stewart who tied for champion in the Performance Hunters 3’6” aboard Laskano and For Always, respectively receiving the Allen Smith Perpetual Trophy, donated by Mr. Bob Bell. 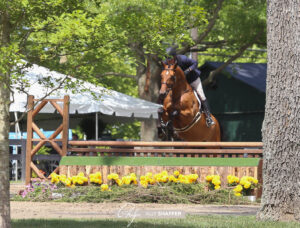 Jimmy Torano and Laskano, a 9-year-old Westphalian gelding, posted a high score of 87 in the first round of the Performance 3’6” Hunters, while Scott Stewart and For Always, a 7 year-old Oldenburg gelding, posted an impressive score of 88 to win the Performance Hunter 3’6” handy round. With each pair earning 10-points based on their rounds, the tie was awarded. Both horses will continue showing tomorrow in the Green 3’6” Hunters and Green Confirmation Hunters, respectively.

Preceding the 3’6” division, the Main Hunter Ring opened competition with the Performance Hunter 3’3” division, which was split into three sections, with the handy round and championship moved to Tuesday. Evan Coluccio claimed the over fences win in Section A aboard High Society and Section B aboard Philadelphia Story, both owned by the Lignelli Family. The highest score of the day was a 90 earned by Hunt Tosh in Section C, riding Chorus for Douglas Wheeler.

Professional hunter divisions at the Upperville Colt & Horse Show will continue Tuesday, June 8, beginning at 7:30 a.m. including the Green Hunter divisions which will feature the USHJA Green Hunter Incentive Stakes classes, offered at the 3’ and 3’3” levels, in Hunter Ring II. 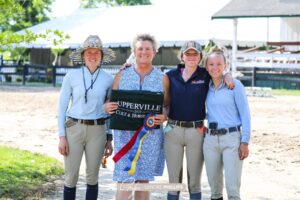 On For Always:
“He is 7 years old and Dr. Betsee Parker bought him this year. He did quite well in Florida and was Champion a bunch of times in the Green Conformation Hunters and the First Year Green Divisions. He is a really beautiful horse! He is not a very big horse, like a giant Warmblood, he has more of a Thoroughbred type look to him. He is a very capable jumper and very scopey. I think he has the ability to go on and compete in the High Performance Divisions later on.”

On the Upperville Colt & Horse Show:
“It is awesome to be back at Upperville! Besides showing in Florida this year, we only competed in Kentucky on the way home and we have spent the last few weeks at home training for this show. It is a beautiful environment but it is a little bit different than what we are used to, so we have to get the horses in the groove with what they are going to do. The main hunter ring is very nice but there is a little hill in it, which is different for the horses and they need to be prepared for it. It is a fun ring to gallop around in and such a fun horse show.”

On Laskano:
“We’ve had that horse a little over a year and he’s been dynamite since the day we got him. He’s a real winner. He belongs to Daryl Portela, a long-time friend and client of ours. That horse has won everything. He was circuit champion in Palm Beach with limited showing and he was champion World Champion Hunter Week. He’s just one of those horses that just tries to win, he never wants to let you down. He was perfect – he walked right in and clocked around. That’s the way he always is. He’s just a horse that always wants to try. When Daryl was showing him it was the same, he was champion every time.”

On his Upperville plans:
“Laskano will do the Green 3’6” Hunter division and the International Hunter Derby this weekend. That’s one of our goals – to do the [USHJA International] Derby Finals. We have a lot of horses here this week, a lot of clients, and I have my son showing in the ponies. He’s wanted to come to Upperville for a few years, so he’s been looking forward to showing here. Danielle [Torano], my wife, is showing and I have a couple I’ll do in the National Grand Prix.”