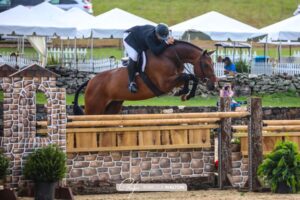 Upperville, Va. – June 12, 2021 – After two rounds of intense competition, Michael Britt-Leon and Private I emerged the victors in the $25,000 USHJA International Hunter Derby, sponsored by Salamander Resort & Spa. Hunt Tosh rode to second-place with Cannon Creek, while defending champions Samantha Schaefer and In the Know were third.

Twenty-eight entries showcased their mounts over a beautiful course designed by Skip Bailey that began over a triple bar oxer and also featured a large brush two-stride that horses had to jump through twice, in addition to our high options to earn extra points. When the top 12 returned for the handy round, riders had the option to bend the two-stride and showcase a hand gallop to the final fence, an oxer. Two panels of judges carefully observed each horse-and-rider combination, and awarded top scores to the horses that demonstrated a correct jump and consistent pace as they met each fence throughout the course. In the handy round, judges also rewarded the handiest pairs with additional points for taking inside turns and showing seamless transitions.

Hunt Tosh and Douglas Wheeler’s Cannon Creek took the early lead after the first round with a score of 188, having 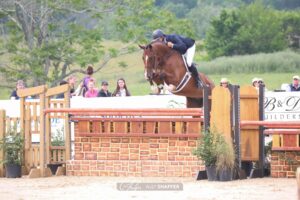 earned a pair of 90s with all four high options accounted for in their score. However, Britt-Leon was just two points away with a score of 186. Defending champions Samantha Schaefer and In the Know, owned by Madeline Schaefer, were in a three-way tie for third with Scott Stewart on Dr. Betsee Parker’s Nottingham and Jennifer Hannan on Kensel LLC’s Mindful, all with scores of 181.

Schaefer and In The Know had the handiest round of the night, earning bonuses of 10 and 8, but their base scores of 87 and 89 left just enough room for Tosh and Britt-Leon to stay ahead of her on the leaderboard. Britt-Leon knew he would need to take an inside turn to the trot jump and hand gallop to the last fence in perfect stride to edge out Tosh. Britt-Leon earned base scores of 92 and 91 with 7 and 9 bonuses in addition to all four high options, bringing his two round total to 393.

Tosh entered the ring focused on winning, but a rub at the second fence and slower hand gallop would leave him just shy of Britt-Leon’s leading score. Having earned base scores of 88 and 90, he settled for a two round total of 390. Britt-Leon was thrilled to lead the lap of honor with Private I, his self-described horse of a lifetime, while Tosh and Schaefer rounded out the top three respectively.

Britt-Leon began riding Private I as a First Year Hunter and has enjoyed developing him with owner Kelly Sims, who rides him in the Amateur-Owner Hunters. He noted that Private I is a performance animal and can be a little cocky around the barn, but he feels he is the same way and that is part of what bonds them together.

The final award of the night was the Russell Frey Style Award, which was presented to Jimmy Torano for his performance aboard Isalou, Inc.’s Laskano.

Junior hunter champions will be crowned on the final day of the 2021 UCHS Sunday, while the 168th anniversary of the oldest horse show in America will culminate with the $213,300 Upperville Jumper Classic CSI4*, co-sponsored by Ethel M. Chocolates and Lugano Diamonds, at 2:30 p.m. in the B&D Builders Jumper Ring I.

On his win:
“For me, I was very busy at the other rings, so I was a bit rushed to get in, so I didn’t have a lot of time to walk the course, which was a little nerve wracking for me. What I find at this horse show is that it’s full of the greatest of greats. My peers were super helpful out on the course, helping me learn where to go and what the tracks were going to be. There were definitely some challenges to the course – a lot of left and right and the height from low to high definitely showed some challenges. The handy was going to be quite tough. I think Samantha hit it off with the inside turn to that trot jump that we were all nervous about. I knew at the beginning Hunt was going to try that, which meant I was going to have to do it, but it seemed to work out. It was a great course with great riders and great horses. That’s what makes it so fun – we all put the pressure on each other.”

On his program with Private I:
“My program is usually the same with him. He shows in the High Performance with me and always right after he shows in Amateur-Owners with Kelly [Sims]. I feel like she is actually a help. With a lot of horses, putting the amateurs on works against you. He loves his mom and he stays sharp for her, so when I put him to the test he performs even better in classes like this. He’s pretty easy going with very little prep.”

On Private I:
“He’s such a special horse for me. I got him just out of the Pre-Green ring, did him as a First Year horse, a Second Year horse and now as a High Performance horse. He tries so hard whether we are here at Upperville or at home trying to school and practice. He’s not one who you like to practice a lot on because it’s not something he enjoys. He’s a performance animal and he’s a little cocky around the barn – I appreciate that because so am I! We have a very similar personality that way. I think it’s very special to have a horse that can do the professional divisions and the amateur divisions well. He tries every time he goes in the ring to win. The jump heights never seem to matter. He’s one I have that bond with – I know that no matter what I do he’s got me and that’s a pretty great feeling.”

On Upperville:
“It’s such an exceptional venue. It’s so beautiful in this ring at Upperville, but this ring especially for the hunters to go in. Sam [Schaefer] and I have been lucky the last few years to be in the top three, so it’s been fun. The footing is perfect, the horses jump great on it. The horses always perform great in this atmosphere, so it’s always a great class.”

On competing in the B&D Builders Ring:
“We’re lucky to have owners that own these horses and support them. So to be able to have it on the center stage like this being equivalent to the grand prix, I think the owners enjoy it and it helps them enjoy the hunters. I think it also exposes a lot of people, especially at a horse show like this, where in the boxes they don’t even realize what we are doing across the street. When you have a class like this and can kind of put the hunters on center stage and let them have the education I think people enjoy it and they do get into it, so it’s fun to have.”

On her performance:
“I loved the first round. I liked that it was a bunch of singles and you could really just let the horses gallop. They looked great between the jumps and they gave us a lot of ground. I think it was a great platform for the horses to make beautiful jumps and just show off their pretty hunter style. As always, the crowd is really into it which adds a whole new element of excitement as you are going around. This is one of the classes I look forward to and gear towards every year, so I’m excited to be here.”

On In The Know:
“I rode two horses today, I rode Caristo as well and he actually finished fourth. For me with Spyder [In The Know] I am kind of at the point where he doesn’t owe me anything – it’s just having fun. I knew he was going to come out and be the best version of himself. He always seems to do his best here.”