Marina Azevedo of Brazil built the 13-effort track, which included two double combinations and several inside turns, as well as long approaches to make up time as they raced to the finish line in hopes of topping the leaderboard. Thirty-five top international athletes vied for first place honors over Azevedo’s speed course with 21 combinations finishing on zero faults.

Ward was third in the ring with Blossom Z, an 11-year-old Belgian Warmblood mare owned by Heller, Wyndmont and 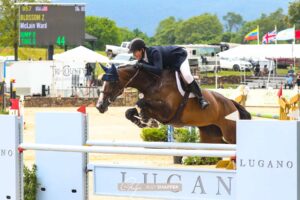 Ward. They set the pace to beat, wearing a target on their back after breaking the beam in 58.10 seconds. The rest of the field tried to catch them, with 17-year-old Debney coming close midway through the class with Boheme De La Roque, a 10-year-old Selle Francais Mare owned by Temple Equestrian LLC. Debney stopped the clock in 58.42 seconds with all the rails intact to finish just behind the Olympian, Ward.

However, Pessoa and Venice Beach, an 11-year-old Hanoverian mare owned by Artemis Equestrian Farm LLC, had the luck of the draw in their favor. As the penultimate combination to enter the ring, Pessoa was able to watch Ward’s round and better it by half a second, cruising through the finish line a faultless 57.74 seconds to capture the victory, while Ward would settle for second and Debney rounded out the top three.

Pessoa was confident in his mare and knew that she could rise to the occasion again this week. Venice Beach is known for excelling in speed class and after watching most of the class, Rodrigo knew exactly what he had to do for them to be victorious yet again.

On entering Venice Beach in the Speed Class:
“I think one of the most important things in our sport is to know how to enter well. This mare showed the first day and did well and this is obviously the kind of class that she excels at. She has such a big heart and I could push her by entering her tomorrow [in the Grand Prix], but that would be out of her comfort zone and not the right thing to do for her. I am really happy that she could win again and she has a nice Sunday off tomorrow.”

On winning a big class while the owners are at the horse show:
“It means a lot to have the owners here. We could not do any of this without the owners. Kristy [Clark] specially flew in to watch the horses show today and tomorrow, so to be able to win is great and hopefully we will have another good day tomorrow.”

On how he bested McLain’s leading round:
“At the end of the day, you don’t have to win by a second or two. Just winning by hundredths of a second gets it done. [McLain] was fast. Obviously I knew because this was a course that I really paid attention to. In the end, I had a big advantage because I could study the course exactly and get it right and stay out of the horse’s way. The horse did what she knows how to do best and luckily it produced a second win here. I am really thrilled with her, she could not have jumped better.”

On the horse he is riding in the Grand Prix:
“I am going to ride Lord Lucho, he is a horse that I also rode today. He went earlier in the class and competed just to warm up a little bit. Tomorrow is probably the biggest class for him because he is a new horse for us. He is a very promising horse for us and we are looking forward to tomorrow and the future with him.”