Alyssa Paulette & When In Rome

Upperville, Va. – June 7, 2021 – Jumper action at the Upperville Colt & Horse Show (UCHS) was highlighted today by the TAKE2 Thoroughbred Jumper class in the Horseflight Jumper Ring II, where 17-year-old Alyssa Paulette of Beaverdam, Virginia, captured the victory aboard When In Rome, an 8-year-old Thoroughbred gelding.The pair cleared the first round and advanced to the jump-off to produce the only double clear effort in 38.44 seconds.

The fastest jump-off time belonged to Kristiane Pellegrino and White Oaks Joyride, but a single rail cost them the win as they dashed through the timers in 27.83 seconds, settling for second place behind Paulette at the conclusion of the class. Martha Nevins and Classic Brother rounded out the top three, lowering the height of one obstacle during the jump-off and finishing in 32.83 seconds for the yellow rosette. 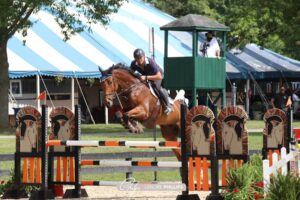 Later in the day, young horses took center stage to close out the day with the Six-Year-Old Jumpers, sponsored by Sparky Frost and SHF Enterprises. Monday’s winner was Silvio Mazzoni with Country Fox Farm’s All Inn V/H Beeckhof Z, completing a double clear effort during the Power and Speed class. Trainer Paige Cade imported the Belgian Warmblood gelding six weeks ago and offered the ride on the young horse to Mazzoni.

Purchased as a resale horse, Mazzoni and Cade will continue to compete with the horse in the Six-Year-Old Jumpers while developing him for the top level of the sport. Mazzoni is looking forward to competing with the talented young gelding in the B&D Builders Arena Tuesday following the day’s highlight event, which will be the NAYJDP Rising Star Stakes at 8 a.m.

On When In Rome:
“We got him from West Virginia when he was a 2-year-old. He’s a Thoroughbred, but he didn’t race because he was too small. I actually didn’t like him at all when we first got him, he was too crazy. It took a lot when we started him, but we slowly brought him along because I didn’t want to push him. I knew he could jump high and I didn’t want to scare him. It took until this year to jump at Upperville.”

On the TAKE2 Thoroughbred Jumper division:
“It’s really good because we don’t have to show against the big warmbloods. Riders could have former grand prix horses and now they are showing in the lower divisions. It’s nice having a division for Thoroughbreds that haven’t been doing grand prix classes.”

On All In V/H Beeckhof Z:
“I imported Arthur about six weeks ago. He’s a bit bigger and a bit greener than I thought he was going to be. I always ask Silvio to help with the young horses, he always does a really great job with them. He did a show about two weeks after he arrived at Lexington, but this is his first really big show. I bought him as a resale horse and we’ll continue to develop him until he’s sold and see how far up the levels he can go. We think he has a lot of potential.”

On Showing at Upperville Colt & Horse Show:
“I wish we could show here all year – I live 10 minutes away and it’s my favorite local horse show and my favorite horse show every year!”