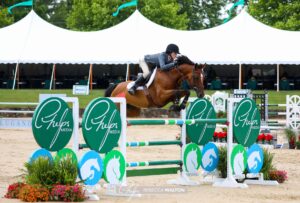 The 1.40m Open Jumpers kicked off the division Tuesday morning featuring a field of 25 entries, many of whom are preparing for Thursday’s $30,000 Upperville American Standard Grand Prix. Early in the class, Cathleen Driscoll set the time to beat with a double-clear effort aboard Plain Bay Sales’ Consul, breaking the beam at 31.24 seconds. The time held up until Robitaille entered the ring with her first mount, Happiness, owned by Alison Firestone LLC. Using her new mount’s quick foot speed and making inside turns, she was able to top the leaderboard for her clear effort in 30.5 seconds. Robitaille was also the last to go with Alison Firestone LLC’s Cocobelle 3, and while she was already guaranteed to win the class, she still put on the gas to dash through the timers in 30.80 seconds without tipping any rails, picking up second place as well, while Driscoll moved to third place.

Robitaille has only been riding Happiness since March, having purchased the talented 9-year-old KWPN mare from Ashford Farm’s Enda Carroll after only seeing her in a video. While the UCHS is a home show for Robitaille, managing her time as both a mother and a professional athlete can prove complicated. Despite missing the class course walk, Robitaille was able to compartmentalize and refocus when she arrived at the show with both her new horse Happiness and Cocobelle 3, an 8-year-old Oldenburg mare who is just moving up to the 1.40m division and claim both of the top ribbons. 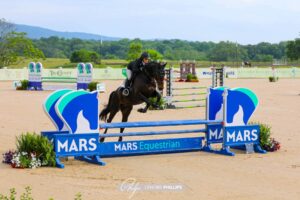 Earlier in the day, Kemper, who was raised in McGaheysville, Virginia, and is now based out of Ocala, Florida and Keswick, Virginia, won the NAYJDP Rising Star Stakes aboard Andra Sinclair’s TikTok Z. She posted the only double clear performance aboard the 4-year-old Zangersheide gelding by Toulon. Kemper and TikTok Z also won the NAYJCP Style class Monday to capture the division’s championship title. She was thrilled with her brave, young mount’s performance and is looking forward to developing him for the future of the sport.

International competition at the Upperville Colt & Horse Show will begin Thursday with the $37,000 FEI 4* Power & Speed Stakes presented by Sotheby’s Realty, followed by the $30,00 Upperville American Standard Grand Prix, presented by the Ingram Family. The 1.40m Open Jumpers will kick off the day Wednesday morning at 8 a.m. in the B&D Builders Jumper Ring I.

FROM THE WINNERS’ CIRCLE

About the course:
“Happiness is a very experienced horse and she has a big stride. I did not even feel like she was going that fast, so I knew I could trust her to go inside everyone else’s tracks.”

On Happiness:
“She came over in March so this is my fourth or fifth show with her. She is very chill and not spooky going into a new ring. I did not try her when I bought her, I bought her off of the video! I am feeling like we are melding into a good partnership. I don’t think of myself as a “catch rider.” I know my horses and have a relationship with them, so this is another great step in that direction. She went so well today, I am not sure if she will go again tomorrow. She will definitely make an appearance in the National Grand Prix.”

On CocoBell 3:
“CocoBell is 8 years old and just moving up to this 1.40m level. I also got her recently, in January. When I am in Florida, I fly back and forth the whole time because my children are still in school in Virginia, so it has been really nice in the spring to have my horses in one place and to be able to ride them everyday and feel like we are really making good progress. She finished up competing in Kentucky really well and I felt like she came right in and built off of that.”

On Showing at the Upperville Colt & Horse Show:
“It means a lot to me to be back competing at Upperville this year. I am so happy that they were able to put on the show this year. I missed competing here last year. It is always nice to be able to show at home, but that also makes it a little more hectic for me because I am also busy being a mom and taking care of my children with their activities. Being a mom means having to compartmentalize your roles but I am grateful to be able to be at home and be with my children and also be able to come to a world-class horse show to compete.”

On TikTok Z:
“My horse is TikTok Z and he is owned by Audra Sinclair. He is a 4-year-old by Toulan out of a mare named Mindini. We got him last fall in Europe as a 3-year-old and had him broken before he was shipped over to us. This is his second horse show and we are really excited about his future.”

On Her Win:
“I think he was super. He did exactly what I was hoping that he would do. He was brave to the jumps and very straight forward. He jumped exceptionally and it is a really nice opportunity that this horse show gives us with this division. There was a very inviting course with a nice time allowed and it is a really nice way to produce these young horses for the future.”

On Showing at the Upperville Colt & Horse Show:
“It’s beautiful here, you could not ask for a more beautiful setting. The management does a really nice job with keeping it running efficiently and smoothly. The footing is beautiful and all the jumps are beautiful. I am based out of Keswick, Virginia in the summer and it is about two hours south of here, so it is really nice to have such a lovely venue so close to us.”